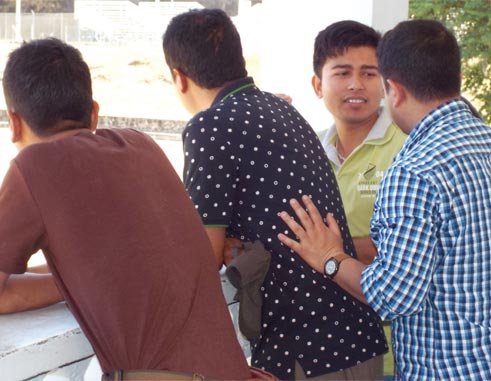 IF a few Aquarius Crossing regulars were to tell DBS newsman, Alex Bousquet, that the Lambirds Academy scandal has to do with lambs and birds, I wouldn’t be surprised. Too many official people remain as silent as lambs while others have allowed transparency and accountability to fly out the window. The whole affair seems so shrouded in secrecy that the Shroud of Turin might well have fewer conspiracy theories tied to it than the Lambirds Academy affair.

The March 3 press conference convened at Chesterfield House – intense as the question and answer session was – seemed limited to the a key theme as far as the cops are concerned: that the police know what they’re doing, so just give them a chance to do so. While the media had been invited to to a press conference to be apprised on the matter, it seemed we were just invited to a lecture on Classified 101. Reporters don’t ask tough questions, my foot!

For starters, while four men were charged for human trafficking, police failed to disclose the genders, ages and nationalities of the said accused. As to why a charge of human trafficking was preferred, Assistant Deputy Commissioner of Police Frances Henry gave the following explanation:

“There are specific ingredients that constitute an offence. And based on what we have seen so far, it speaks to everything that we’ve been able to identify. A specific example is that persons are being brought in here and certain offerings have been made to them. They have been made to pay (and) certain promises have been made to them. There is a certain expectation that if you pay for a service or something, that you would expect to get X,Y and Z. Monies have been received. We have seen instances in which specifically their travel documents have been detained. The conditions under which they live in terms of their movements and all of that (and) safely we can indicate that these are individuals living in a controlled environment. And that is just one example of it.”

To date, many Saint Lucians seem baffled that the human trafficking charges are appropriate. The media, too, has its qualms about the choice of charge. But, according to Henry: “The specifics of the case are not things that we’re going to put out there at this time. Possibly later as the matter progresses, we will be able to give you a little more information.” Since that March 3 press conference, the police have only told us that one of the four men charged – Iftekhar Ahmed Shams – has also been charged with money laundering.

Another case of accountability and transparency not really walking their talk has to do with the nationalities of the close to 60 students who were affected by the fallout from the Lambirds Academy affair. Police have not even disclosed how many males and females are affected let alone the age range. But I’m sure local cops know way more than they imagined they would about the Germanwings crash in the French Alps.

On March 3, DCP Henry told the media that following the early morning raid at six locations in the island’s north, “we identified at least 60 individuals – there were 60 individuals, Nepalese as well as other Indian ethnic groups. However, in the pursuit of our investigation, we also engaged in the forfeiture of a host of documents and we are currently pursuing these documents.” The media later found out that the students are of Nepalese and Filipino origin.

There’s also a trade licence purportedly issued by the Trade Licence Advisory Board to Lambirds Academy on January 23 this year to engage in educational and training. That licence has an expiration date: December 31, 2015 and carries what seems to be the official seal of the Ministry of Commerce, Business Development, Investment and Consumer Affairs and signed by the Secretary of the Trade Licence Advisory Board.

A fourth document, a Certificate of Incorporation, seems to certify that Lambirds Academy “was incorporated under the Companies Act of Saint Lucia” and purportedly signed by Deputy Registrar Peronia J.K. Browne, on May 22, 2014.

To date, there has been no unequivocal official statement from the local officials whose signatures purportedly – for now “purportedly” would have to suffice — appear on these documents to either verify or deny the legitimacy of said documents. All that has been communicated thus far are the level of assistance the government has been extending to the stranded students and plans being made in concert with the UN International Organization for Migration (IOM) for their repatriation.

The fact that nearly 60 foreigners are stranded here thousands of miles from home should be reduced to a few press releases from local authorities deserves no applause. More information, especially as it relates to the four abovementioned official-looking documents, should be forthcoming from the relevant agencies cited as issuing them. If there’s evidence of culpability – or lack of — on anyone’s part, that needs to be made known to a populace that is becoming increasingly wary of being told that transparency and accountability are the norm when it’s clear that that mantra is applied subjectively.

A statement from the Office of the Prime Minister yesterday quotes Prime Minister Dr. Kenny Anthony as saying that while “there are some very troubling aspects of (the Lambirds Academy) matter”, “the Cabinet of Ministers had already taken a decision to conduct an independent inquiry into this matter to determine, among other things, how the investors were granted approval, how the students arrived here and what were the arrangements made for their studies and welfare.” The inquiry, Dr. Anthony said, “cannot, however, compromise ongoing investigations by the police or the filing of charges by the Director of Public Prosecutions”.

The missive from the Office of the Prime Minister seems well-intentioned albeit it again took inflammatory comments made by the opposition United Workers Party (UWP) this week to spur such a response. While it also seemed like pulling teeth getting even basic information from the UWP while their administration was in office, the hypocrisy seems to be working wonders for all of us. At least we’re getting somewhere despite us having to put up with yellow tape in one season and red tape in the next.

If you asked me, the Lambirds Academy matter calls into question yet again our lacklustre and casual approach to checks and balances in this country. We don’t need to be reminded of business establishments that get licences to operate here but never seem to make any effort to live up to the inherent criteria. Who’s doing the follow-up after these fees are paid? Who’s closing down food establishments where flies and cockroaches mock customers? In fact, who did due diligence at Lambirds Academy? Questions are being asked and answers are being demanded.