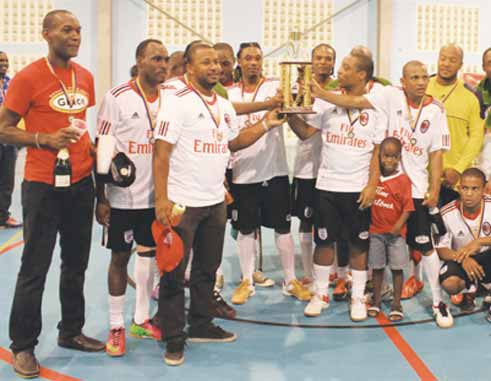 Distillers Go Down 2-1 In Finals.

IT can best be described as the biggest crowd ever to attend a commercial house sporting activity as there was only standing room available at the Beausejour Indoor Facility for the inaugural Chamber of Commerce / Commercial House Futsal final on Friday evening.

Despite the main doors being shut, the loud noise could have been heard echoing in the distance, while on centre court Peter and Company took charge of business over St. Lucia Distillers, limiting the advance of them scoring machine with an epic 2-1 victory.

No.4 Nilan William put Peter and Company ahead in the 9th minute. He doubled the score in the 15th minute with a well taken right footer that squeezed its way between the uprights and the SLD custodian who for the first time was under tremendous pressure, to leave the half time score 2 – 0.

The resumption saw St.Lucia Distillers making a few quick changes and so too did PAC, but it would be SLD that remained in a defensive mood for the first time in the competition. With the time on Referee Leo Clarke’s watch ticking away and the loud noise at the BIF now unbearable it was left to St. Lucia Distillers’ prolific goal scorer No. 10 Jamal Antoine to cut the deficit by one in the 39th minute. But his strike was just not enough to send the encounter into extra time.

For the third place silver ware LIME came from behind to defeat FLOW 4 – 3 in a match many thought was won in the first half. But there is an old saying: “Never count your chickens before they are hatched”. Two quick strikes from FLOW’s. No. 8 KalebJn Baptiste in the 10th minute and No 10 Anthony Christopher in the 11th minute had their supporters starting an early celebration, Christopher was again in the thick of things when he put his team further ahead in the 19th minute to make it 3 – 0 and to seize the initiative at the half time whistle.

One minute into the second half LIME’s No. 10 Anthony James opened up the floodgates with a shot that beat the FLOW custodian all ends up No.13 Kissinger Anthony’s double strikes in the 22nd and 29th minute had the BIF ablaze and FLOW supporters stunned as to what had happened to them. With most supporters standing and those sitting on their edge of their seats either biting their nails or their fingers crossed the atmosphere was simply crazy with the scores now locked at 3 – 3.

With nine minutes remaining and from my vantage point, the team that really wanted it, won on the evening. LIME had regained their confidece and was in a attacking mood as they proved too much for FLOW the experienced No.4 Kevin McPhee was the man of the hour when he scored the winner in the 31st minute to seal the deal and start a celebration for his team and supporters.

At a brief awards presentation following the showpiece prizes were presented. The championship trophy and gold medal to Peter and Company, 2nd place trophy and silver medals to St. Lucia Distillers, 3rd place trophy to LIME.