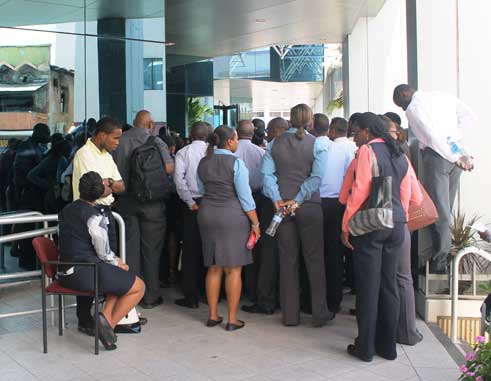 THE National Workers Union (NWU) says it is monitoring a situation in which a small group of privileged and unscrupulous employers is taking advantage of the fact that workers will accept any form of inhumane treatment given the current economic situation the country is facing.

The union, however, has declined to name the employers but warned that it will monitor them and at the right time expose them.

The St. Lucia Employers Federation has jumped in and denied that its members are part of the small group mentioned by the union.

“While workers are primarily concerned with putting food on the table for their families, it must be made abundantly clear that workers’ rights, labour laws and industrial relations best practices must be respected and adhered to. Workers’ rights and aspirations must not be sold at a buffet dinner table,” said Tyrone Maynard, NWU’s President General in a release Tuesday.

“The NWU believes that should this disgraceful and dangerous trend continue by some of our well known employers, without nipping it in the bud, workers will be forced to adopt a new working culture that will be unsuitable for business and will destroy the industrial fabric that is of huge necessity to drive productivity,” the NWU statement read in part.

Joseph Alexander, Executive Director, of the St. Lucia Employers Federation said that while there may be unscrupulous employers in the country none of them can be found in the Federation.

“None of my members would fall in that category,” Joseph said noting that the Federation’s membership stands at 135.

Joseph said that the Federation’s members are from “the old school” and are employers who have been in business for some time in Saint Lucia.

“The new companies are not our members,” he said.

The NWU of late has had grievances with two well- known employers that have led to industrial action. The union, earlier this year had problems with the National Insurance Corporation in which it had to call for the resignation of one of its directors.

This week it was the turn of Bank of Saint Lucia. Employees Tuesday undertook a wild cat strike that lasted just for the day. They returned to work yesterday. About 250 employees participated in the strike action from the bank branches in Soufriere, Vieux Fort, Bridge Street in Castries, the Castries Waterfront, Gros Islet and other operational units.

The union said that employees’ action was as a result of a misunderstanding during negotiations which would have changed a principal undertaking agreed to at the talks. General Manager designate, Ms. Esther Brown met with the National Workers Union in a two hour session to resolve the issue.

The union, two months ago called on Labour Minister Robert Lewis to look into an industrial discrepancy it at two major unidentified companies on the island.

The NWU claimed that the companies were not paying overtime compensation to their employees.

“….it is unfair to hunt down small businesses operating in the country for overtime payments due to workers while those two major companies operating right under our nostrils are allowed to continue this industrial lawlessness, “the union said at the time.