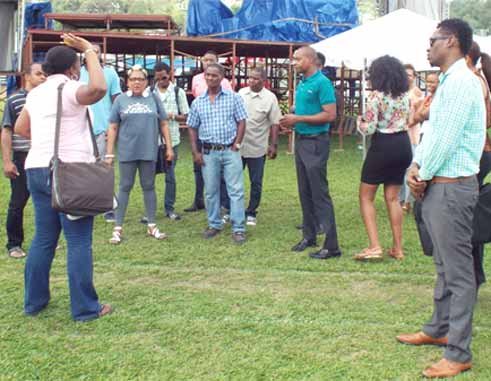 THE St. Lucia Tourist Board Association has given the all clear and has shown members of the local media that all is set and in order for tonight’s highly anticipated opening of the 24th annual St. Lucia Jazz and Arts Festival at the Mindoo Philip Park.

Public Relations Manager of the SLTB John Emmanuel, said that a gathering of this sort was important since the media was grouped as a contingent because they continued to be a major partner with the festival.

Emmanuel said the media continued to spread the word and to do so with exuberance. He said they were also valuable partners in terms of helping organize and promote the festival.

The media this year has not been grouped together with the other corporate partners but as “media sponsor partners” from “platinum sponsors” all the way down to “collateral media partners”.

Emmanuel said” “This activity is important just because we have a lot of broadcast media. We have a lot of print and conventional media who need to know for themselves what the set up is. They need to know how it is that they will be facilitated, how they’re going to cover the activities and of course, it is also critical for us to get feedback from you. So as we begin to tweak the festival in general, we’re also tweaking some of the infrastructure on the ground, where we place media, how we better facilitate them so that they could see and capture the events happening and at the same time to be comfortable enough that they can carry out their duties”.

A number of changes have been applied to the venue including designs and schematic diagrams to make sure that the layout is best for all concerned.

Emmanuel happily said: “We believe that when the curtains raise, come April 30, we will deliver that wow factor and I thank you, our friends from the media, for the help in ensuring that when members of the public come in as patrons to the festival they will indeed be thrilled by what they will see for the opening, setting the tone and the stage for what will come throughout the entire 11 days of the 24th edition of the St. Lucia Jazz and Arts Festival”.