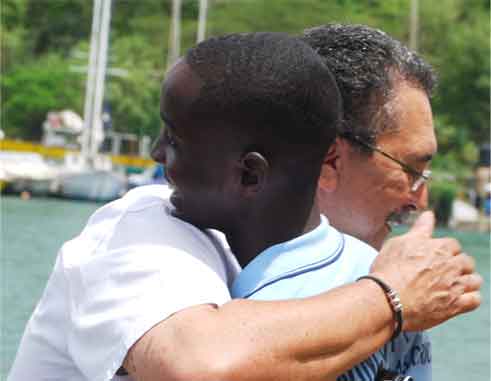 LAST Friday the Ministry of Youth Development and Sports honoured outstanding national teams and athletes who have captured awards in recent competitions.

Cricket, tennis, swimming and track and field were the disciplines represented at the luncheon held at the Coal Pot Restaurant, where athletes, coaches and parents were treated as an expression of appreciation for their individual and team achievements on the regional level.

Prime Minister, Dr. Kenny Anthony lauded the athletes for their dedication and outstanding performances. He was particularly pleased with the cricketers who successfully defended their Windward Islands Cricket Tournament title. Given the current state of West Indies Cricket, the Prime Minister said, the remarkable achievements of players such as KimaniMelius, student of the Babonneau Secondary School and Captain of the National Under – 15 Team, signals that there is hope for the future.

Dr. Anthony acknowledged the efforts of all coaches, managers and parents, stating that they are often left in the background. Said the Prime Minister, “Our coaches are special and we must honour them. The passion, commitment and faith they have shown in our young people cannot go unnoticed. Many of them give their time and talent free of charge and deserve commendation”

The tennis team has performed exceptionally well, under the guidance of veteran player Vernon Lewis and were present, with their trophies on display. St. Lucia participated in ITF tours in Barbados, Trinidad and Tobago and Guadeloupe, returning as singles and doubles champions in some divisions and finalists in others.

Dr. Anthony thanked the Ministry of Youth Development and Sports for the initiative to recognize and encourage the teams and pledged his continued support to the development of the youth.