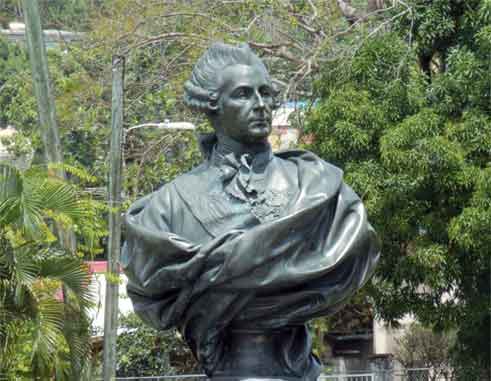 A bust of Charles Eugene de la Croix Marquis de Castries that was relocated from the Constitution Park in 2013 to make way for the Sir John Compton Monument, was unveiled in George V Park, Castries, on Tuesday.

Speaking at the relocation and unveiling ceremony French Ambassador to the OECS, Eric de La Moussaye expressed his pleasure at the choice of placement and the long-lasting relationship between the Government and people of France and Saint Lucia. The Ambassador said: “The choice of this spot is very symbolic: France, by choosing this spot and Saint Lucia by agreeing to it, shows once again that our friendship is alive and well.

“Despite our fast changing world and the reality of globalization, it is good to remember how partnerships began and how friendships were born and last. The historical monuments and statues of great men of history, such as the one we celebrate today, exist as testament to this friendship.”

The Ambassador also spoke of the significance of the bust and the involvement of the Marquis of Castries in shaping the friendship between France and Saint Lucia. He said:

“In erecting this statue, we are honouring more than one man; we are honouring the history of a people. However, we honour a very important period in which Saint Lucia went through and which has contributed to forging the destiny of the island and of its people.

“When Charles Eugene de La Croix arrived in the Caribbean for the first time in 1756, he was part of the expeditionary corps which the French had sent into the region to contest control of the Antilles by the English. As admiral and commander, he very quickly understood Saint Lucia, with its central position, its rich land and its exceptionally safe and deep harbour was or significant importance. From then on, he dideverything to ensure it remained a French territory.”

In his remarks at the unveiling ceremony, Prime Minister, Dr.Kenny Anthony spoke of the “long knitted relationship” between France and Saint Lucia and the significance of the bust. Said Dr. Anthony,

“Today’s ceremony is representative of another one of many threads in the long knitted relationship between Saint Lucia and France.

“Undeniably, France has been the nation most heavily involved in the early settlement and formation of the Saint Lucia; for while the British were about capitalising Saint Lucia’s military value for their eighteenth and nineteenth century stratagems, the French were keen on establishing settlements and estates, building roads and raising families and constructing a society in their colonial image.

“And thus, the names of most of our settlements are influenced by the notions of these early French settlers and inhabitants.

“Many of our places are named for individuals who were governors or who played critical roles in the island’s development: D’Ennery, De Micoud, De Laborie, Choiseul. De Castries falls within this class of place names, with the Marquis de Castries being part of a French expeditionary force in 1756 which failed to win Saint Lucia back to the French. It was later restored under the Treaty of Paris seven years later in 1763.”