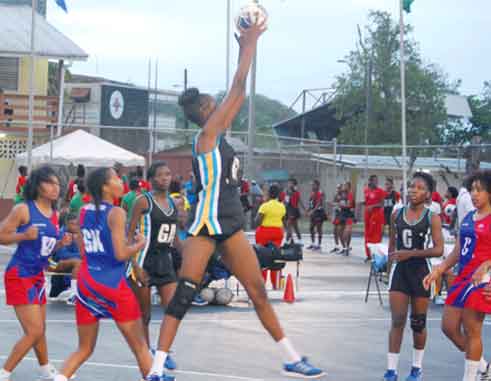 HOST nation St. Lucia opened their campaign in the 2015 Jean Pierre Caribbean Under-16 Netball Tournament with back to back wins over Bermuda and Dominica at the VigieMulti-Purpose Sports Complex at the weekend.

In front of what can best be described as an appreciative crowd and despite overcast skies and playing on a wet surface, St.Lucia had the better of Bermuda 30 – 14. From the start of the match Bermuda quieted the host country by matching them goal for goal in the first quarter ending it with a tied score of 6 – 6.

The Bermudians continued to impress the home crowd seeming to hold their own ending the second quarter as St. Lucia led 14 – 9. During the half time break the St. Lucia coach Shem Maxwell made some adjustments to her starting line up and saw some urgency in the defence thus causing Bermuda to become a bit unsettled. St. Lucia’s approach in the final two quarters proved to be effective as Bermuda was unable to gain any momentum.
Also on the night on Court No.2 Grenada defeated Trinidad and Tobago 23 – 17 and Barbados squeezed past Dominica 23 – 18.

In Game 2, Bermuda came back strong from their previous loss at the hands of St.Lucia to defeat Grenada 27 – 18. For Bermuda (Goal Shoot) Donnauri Robinson scored 22 from 37 attempts and (Goal Attack) Ishan-nae Smith 5 from 7 attempts. For Grenada (Goal Shoot) Carolyn Alexander netted 17 from 22 while (Goal Attack) Holly Charles 1 from 1.

In the final game of the evening St.Lucia won over Dominica. St.Lucia were up 12 – 9 at the halftime whistle. For St.Lucia Kamala Mangal scored 22 from 27 attempts and Tanny William 3 from 5 attempts. For Dominica (Goal Attack) Kayla Wilson for Dominica scored 10 from 17 attempts, CelenaLangais 4 from 5 attempts, and substitute (shoot) Shanice Henry netted 4 from 10 attempts.
In the morning session on Day 3, Grenada stunned St. Vincent and the Grenadines in a nail biter 25 – 23. For Grenada (GA) Yannisha Scipio scored 1 from 3, (GS) Iteisha Mathews 24 from 29. For St. Vincent and the Grenadines (GA) Hollu Charles had 5 from 7 and (GS) Carolyn Alexander 17 from 26.
In the second game Barbados steam rolled Bermuda 36 – 10. For Barbados (GA) Tristan Deceine scored 10 from 12, (G S) Romania Edwin 22 from 32 and (GA) Tricia Phillips 4 from 8. For Bermuda (GA) Idenesia Smith scored 4 from 6 and (GS) Donhari Robinson 6 from 7.

In the morning’s final game played Dominica secured their first victory by defeating the winless Trinidad and Tobago Team in a close scoring encounter 21 – 18.

Tomorrow from 6.15 p.m. Trinidad and Tobago plays Barbados on Court No.1, St.Vincent and the Grenadines will be up against Dominica on Court No. 2 from 6.30 p.m. and Grenada meets St.Lucia on Court No.1 from 7.15 p.m.