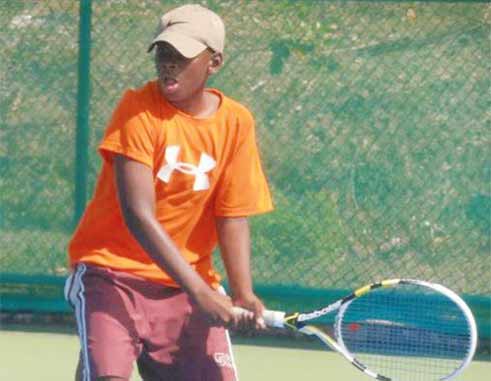 PHENOMENAL is the word that comes to mind as five of the six junior tennis players, all coming from the Vernon Lewis International Tennis Academy have emerged winners and are returning home with a trophy or two in hand.

They are competing in the Eastern Caribbean Tennis Championships, a tournament of the International Tennis Federation (ITF).

In the boys draw of the first leg in Barbados, the 2014 junior sportsman for the year Adriel Bousquet ended as the runner up in the finals when he gave in to Kaipo Marshall of Grenada at 2:6, 6:4, 7:5. However in the doubles he emerged victorious when he teamed up with Mauricio Burton of Dominica bypassing the team of Lukas Gosselin of Canada and Christopher Phillip of Barbados.

In the consolation draw 12 year old Aidan Bousquet took it home when he defeated Kevon Maithland of Grenada 2:4, 4:2, 10:8

Meanwhile in Trinidad, everyone stepped up to the plate advancing to the main draw of the second leg. Adriel Bousquet again found himself in the finals and served off in grand style by sending Trinidad’s Adam Ramkissoon searching with a win of 7:5, 6:3.

And as if that wasn’t enough, he teamed up with his fellow countryman Nathan Francis to take on little brother and cousin Aidan Bousquet and Nicholas Š John in the all-St. Lucian doubles finals winning 6:3, 6:2.

Meggan William meanwhile did not make it past quarter finals in the girls draw but when she teamed up with Trinidad’s Jade Tom Yew they made their way through to the finals winning over the St. Vincent team of Alexi Humphrey and Anastasia White 6:4, 3:6, 10:8 to secure the Girls Doubles title once again. Last year Meggan teamed up with another Trinidadian Emma Davis to bring home that same title.

Coach Vernon Lewis is elated with his students’ performances overall and said: “This is a major boost for St. Lucia’s tennis, something that hasn’t been done before. The players are talented and got style too”.

The St. Lucia Tennis Association congratulates all of the players for making St. Lucia proud and looks forward to more wins from them, when Adrie,l Aidan and Nicholas St. John move over to Guadeloupe to take part in the other ITF Tournament which serves off today while Meggan William and Nathan Francis return to St. Lucia today.