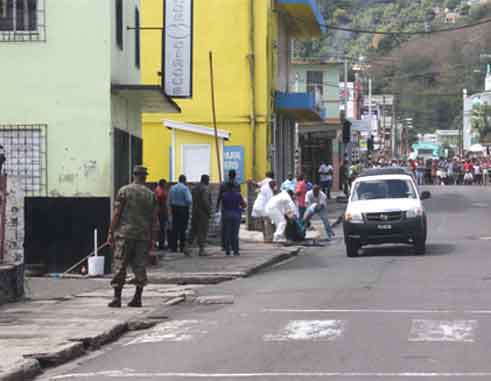 Is this an unintended consequence of the damning MARCH marked the third month in a period of unprecedented calm in the history of law enforcement in Saint Lucia, during which time no homicide had been recorded for 2015.

March was also memorialized for the presentation of a national address by Prime Minister Dr. Kenny Anthony entitled “A distressing issue to confront” delivered on March 8. In that address, which had as its basis the findings of the investigation into the alleged extra–judicial killings by the Royal Saint Lucia Police Force, the controversial IMPACS report – the Prime Minister made certain pronouncements which, he said, were presented in the report.

As damning as the report was it must be remembered that he did not simply report, but reported on specifically selected parts of the full report; supposedly those that served his purpose or agenda; whatever that was.

Whether done inadvertently or not, the pronouncements that were made clearly demoralized the Police; some cops admit that generally the Force was left feeling criminalized, their image was officially placed in a very dim light and that the address brought them untold personal grief and public criticism for their conduct in Operation Restore Confidence during the years 2010/2011 when they risked their lives to confront some of the most brutal criminals at the time in order to restore safety to the streets of the capital.

Mind you, operations involving the police are not unheard of, but are very much a part of law enforcement strategies. Indeed the Prime Minister would be quite familiar with this aspect of policing as under his watch in 1998, Operation Restore Peace was launched by the RSLPF. The response of the police back then was similarly preceded by a number of violent killings among rival city gangs, as was the case with “Operation Restore Confidence”, involving well–known suspects and victims such as Michael “Gaboo” Alexander and Adolpus Clarke also known as “Bonny”.

Prime Minister Anthony also delivered a national address with respect to Operation Restore Peace in 1998 and having described the upsurge in crime with vivid examples said (interestingly similar in tone and tenor to Stephenson King’s May 30, 2010 address to launch Operation Restore Confidence, (Dr. Kenny said) “Commencing today, and continuing until it has obtained its operational objectives, the police will undertake a firm and sustained operation to secure our streets and rid our communities of this distasteful behaviour. The actions to be taken by the police will be numerous, varied and the operation will take place at different levels and throughout the country. Operation Restore Peace will use all lawful means to bring an end to the type of criminal action we witnessed last week, and to apprehend the perpetrators thereof.”

He continued: “I have made it clear to the Commissioner and the heads of the Operation that while the rights of innocent parties must be respected, the police should be prepared to act resolutely against those who are involved, those who assist the main perpetrators and any person or persons who hinder, or attempt to obstruct the success of this operation. This Government will stand firmly behind the police, in all their lawful actions in this matter.”

In 2015, the same Prime Minister, commenting on another Police operation led by another administration transmits a tone which is remarkably different. Is it because it was another government’s initiative this time round that he was now so critical? As the Prime Minister came to deliver the “distressing” findings of the IMPACS report, he dwelled considerably on the three issues which he described as reasons why delivering the address was difficult and challenging in order to set the tone for the coming bombshell. Amazingly, the leader of the country only gave the slightest recognition and acknowledgment to the historic calm in criminality which pervaded the island: “It is therefore ironic that I am addressing you on this subject at this juncture, when, for the first time in more than a decade, we have not had a homicide in January or February”.

The Prime Minister then proceeded to deliver a most disturbing narrative which was attributed to the findings of the IMPACS report. The effect of that address was undeniably very unnerving and dealt what some perceived to be a crushing blow to the cops. It obviously shook the high command of the Police to its very core. As reactions to the disclosures swept across the nation shortly after the presentation of the Prime Minister’s address, many law abiding citizens began to entertain serious trepidation that criminals may have felt empowered because this address seemed to have unwittingly given the impression that the Police was now stripped of legitimacy, stripped of government’s support and approval of its crime fighting tactics; essentially leaving them in a weakened position where they would be unable to act or respond with their usual effectiveness and authority.

The address on the IMPACS investigation has become a national sore point and source of consternation within the public and the Police Force. Some are of the view that many unintended consequences were triggered in the aftermath of the Prime Minister’s March 8 address.

Unfortunately, from Saturday, March 4, the country has begun to see not only a re–igniting of gun related violence but also a spate of brutal murders which seem to be brazenly and casually carried out in public. In the midst of this challenging period, all eyes are now trained on the Saint Lucia Police to restore calm and the rule of law. Local Police and not a CARICOM– IMPACS team or the Jamaica Constabulary Force are expected to respond to the spike in cold–blooded murders occurring in the city circuit.

words of the Prime Minister when he appeared to have thrown the cops under the bus? The overarching concern is: will the Police feel sufficiently empowered by the support of the directorate to rise to the occasion, or will they feel constrained in responding and dealing with criminality for fear of later being subjected to accusations of human rights violations or investigations into extra–judicial killings?