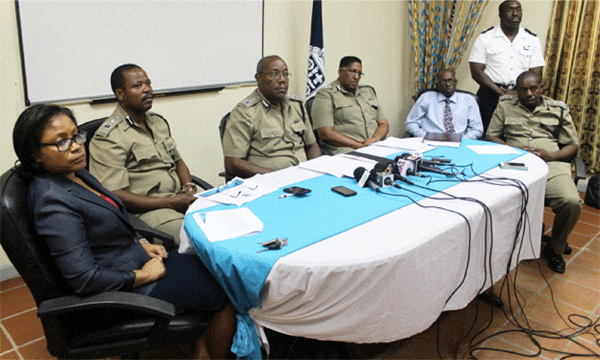 How Come it was Not Applied To Jamaica.

FOLLOWING Prime Minister Dr. Kenny D. Anthony’s March 8th address to the nation on the Caribbean Community Implementation Agency for Crime and Security (CARICOM IMPACS) Investigations, Saint Lucians invariably feel compelled to continue to ponder, with good reason, the explanation given for the actions of the US against the Saint Lucia Police. How it could possibly be, that Saint Lucia has infamously become the first Caricom member where the Leahy Law has been punitively imposed?

To appreciate just how difficult it is to accept the Prime Minister’s explanation, on why Saint Lucia is now categorized as a country with an appalling Human Rights record, necessitates an examination of the countries and circumstances under which the Patrick Leahy law has been applied.

If we are to assume that the US is acting fairly and consistently in its application of the Leahy Law, then the actions and incidents which justifiably warrant the imposition of the Leahy Law include prolonged, state backed mass murder, detention, torture, massive casualty counts and the displacement of thousands of people in a climate of sustained unrest and oppression.

In Nigeria: “more than four hundred people died in 2013 from violent inter–communal conflict in the middle belt states, and scores were rendered homeless from clashes”.

We also recall Chile’s case during the dictatorship presided over by General Pinochet. Between 1973 and 1990.The regime was characterized by the systematic suppression of political parties and the persecution of dissidents to an extent that was unprecedented in the history of Chile. Overall, the regime left over 3,000 dead or missing and forced 200,000 Chileans into exile.

Can we compare the scale of atrocities in these countries to the situation which existed in Saint Lucia during Operation Restore Confidence in 2010/2011? Indeed this snapshot of the well–known Human Rights violators around the world makes it even more illogical and shocking that Saint Lucia is now categorized with those countries, on the basis of twelve alleged extra– judicial killings.

Is the government implying by virtue of its acceptance of the findings of the IMPACS report that the island has been on a similarly destructive path as those countries that are well–documented for committing sustained acts of oppression and repression? Unless their process of critical thinking is completely abandoned, citizens will continue to find this issue mystifying, because as far as the people of the region are aware, nations in the Middle East, sub–Saharan Africa and North Africa account for the vast majority of Human Rights offences.

One would agree that cases of Human Rights violations which attract such heavy handed treatment usually portray some of the most unspeakable and inhumane circumstances ever seen. However when this happens to a peaceful and stable democracy, where free and fair elections are held, then clearly this is a serious departure from the norm. It certainly begs the question: was there more which motivated the United States to take this hardline (action) against the island?

Inevitably there is speculation which suggests that damaging reports had been regularly communicated to the US Embassy in Barbados by those seeking to portray the government of the day in a dim light to the US government. Did some people convey to the Embassy that “rogue politicians” had played a dark and malevolent role in Operation Restore Confidence to bolster their party’s image on crime fighting?

Such speculation leads to questions that the authorities clearly have not addressed, perhaps because the IMPACS report has been well-defined as a classified document. Some say “conveniently so”. Despite that lack of transparency, the questions will continue rolling in. How much of the actions that we are now forced to defend stems from injurious conversations, e–mails and other negative correspondence shared with certain persons who held key positions in the Embassy in 2011?

Is the entire country paying for the “mauve lang” of the few who were willing to stop at nothing to grasp the reins of power, undeterred by the risks and consequences that might have followed? How much of this is an act of self–inflicted wounds by those who were fixated on their narrow agenda to malign the image of the former administration, and one minister in particular? Is this the repercussions of a bad case of “chagrin pouvoir”?

It is well known that there have been far more egregious cases where action by government forces in Jamaica, Trinidad and Tobago and Guyana to likewise deal with outbreaks of gang violence, homicides and other criminal activity, seem not to have attracted a similar fate (i.e. the Leahy Law), even though police killings in those territories far exceed 12 persons over two years in St. Lucia. Interestingly enough these countries seem to have escaped the scrutiny of the US.

In the case of Jamaica, its Human Rights report of 2010 indicates that: “There were reliable accounts that security forces committed unlawful or unwarranted killings during the year. According to official statistics, there were more than 309 killings involving police during the year. This figure does not include the 73 civilians that security forces killed in May during operations to arrest an alleged drug lord and gain control of a criminally controlled area.

Reliable sources indicated that many killings by police were unreported, with police meting out the justice they see as unavailable through the judicial system. In most shooting incidents, police alleged that the victims were carrying firearms and opened fire on them. In many cases, however, eyewitness testimony contradicted the police accounts. In other cases allegations of “police murder” were suspect because well-armed gangs trafficking in weapons and narcotics and running lottery scams controlled many inner-city communities and were often better equipped than the police force. Violent crime remained rampant, and on many occasions the Jamaica Constabulary Force (JCF) employed lethal force in apprehending criminal suspects.”

It cannot be overlooked that the IMPACS “findings” referenced in the PM’s national address are not markedly different from what is recorded in Jamaica’s Human Rights report for 2010 in terms of alleged occurrences of extra–Judicial killings and cover ups attributed to the Police etc. Notwithstanding that Jamaica’s Human Rights report presented some interesting findings as well, with much of the negative text also directed at the police and judiciary, Jamaica did not fall victim to the Leahy Law.

Interestingly Saint Lucia’s Human Rights report 2010 is largely silent on “Operation Restore Confidence” although it was already underway. However in 2011, an election year, not only is there information dwelling on the suspected extra– Judicial killings but the language and tone is more damning and salted to taste, than the previous year. Coincidentally, there seems to be striking similarities with some of the rhetoric used by the leading opposition voices of the day. Was Saint Lucia’s Human Rights e report 2011 drafted with the help of local sources with a particular agenda in mind?

This week’s April 09, visit to Jamaica by the US President Barack Obama despite the island’s Human Rights record, replete with cited Human Rights violations and hundreds of police killings are a clear indication that the US has no issues with Jamaica and no intention to apply its dreaded Leahy Law. Not so for Saint Lucia. Twelve killings were enough to incur the wrath of the US, albeit with local help. The real reason for Saint Lucia’s plight will some day come to light. We believe that: “You can fool some of the people some of the time but you cannot fool all the people all the time because now they see the light.”