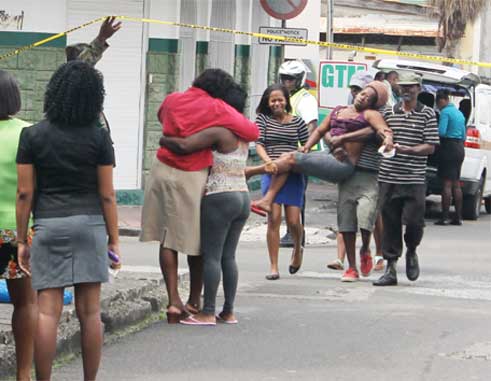 GUN violence has claimed three lives in a three-day span, ending a three-month period of no recorded homicides.

Police say the first fatal shooting occurred around 11:30 p.m. last Saturday. Reports are that Harris died when gunfire erupted near Lower Morne Dudon Road close to Wilton’s Yard. Harris, a vagrant who had for many years lived outside an abandoned building, suffered gunshot wounds to the neck and upper body.

Harris was transported to Victoria Hospital via a hearse after showing no vital signs and later pronounced dead.

Charles was the second man killed over the Easter weekend when a shooting incident occurred around 1:30 a.m. at Monkey Town, Ciceron. Police say he suffered gunshot wounds to the head and upper body and demonstrated no vital signs at the scene. He was later transported to Victoria Hospital where he was pronounced dead.

The third homicide victim, Emmanuel, was killed in broad daylight around 11:00 a.m. on Tuesday when he was shot near the Leslie Land area. He succumbed to his injuries on the sidewalk on Chaussee Road.

Emmanuel, who resided at Bexon, Castries, was said to have gone to meet some individuals who were supposed to fell some trees on his farm when he came under fire from masked assailants.

Scores of people gathered at the scene of Tuesday’s shooting while Emmanuel’s body lay on the sidewalk for three hours as police processed the crime scene. Many in the thick crowds feared that gang violence that had dissipated over the past few months would escalate again.

Emmanuel was described by many as someone who spoke out against violence, and was a key figure in Wilton’s Yard, and one who had no part in the turf war between rival communities. His death, they say, might have been targetted.

Meanwhile, Castries Central MP, Richard Frederick, who arrived on the scene Tuesday to console Emmanuel’s emotional wife, Cheryl Clarke, told the media that the escalation in violence in the city was “really heartbreaking”. Frederick, who initiated the “Peace and Love” truce among rival gangs some years ago, said more needs to be done to ensure that the gains made then can be sustained.

“It’s kind of difficult to fathom given the fact that all your efforts are being geared in one direction in terms of bringing peace and tranquility and a certain degree of safety to our streets,” Frederick said. “I mean, all of this is just going down the drain and it begs the question (as to) what needs to be done to ensure that we return to a situation of at least walking safe streets.”

Frederick added that violence not only affects citizens but also the tourism industry. He issued a call to the authorities to ensure that the country becomes one where people can feel free to feel safe again.

“I don’t know what can be done at this point. But I think I need to call on the authorities to do whatever is necessary within the ambit of reasonableness (and) legality to restore peace and safety to the streets of our country,” Frederick said.

When asked whether he thought the “Peace and Love” campaign should be resumed, Frederick said that since “it worked and it worked wonders”, the campaign should have continued despite the change of government.

“I don’t know what has been done in that regard. I cannot do it on my own (because) I lack the resources from a personal standpoint. But I believe that if we all come together to do what is necessary, we can return a certain degree of safety to the streets of our city,” Frederick explained.
Acting Police Commissioner, Errol Alexander, weighed in on Tuesday, saying that while police applauded this year’s 93-day record of no recorded homicide, law enforcement will not let up in cracking down on violence.

“We are going to apply the full brunt of the law,” Alexander said at a press briefing on Tuesday. “I know that the public has been hearing that particular phrase over and over again. But from our standpoint as police officers (and) an organization, we are not down and out if these criminals and them think we are down and out.”

Alexander said the shootings will be investigated and likely prosecutions will follow. He also called on members of the public to share whatever information they have about the crimes with the police recognizing that the newer and younger face of criminals were now holding the nation’s streets to ransom. Nevertheless, he said, police will respond to the challenges they face.

When contacted yesterday, the Royal Saint Lucia Police’s acting Press Officer, Senior Constable Zachary Hippolyte, told The VOICE he could not confirm whether any arrests had been made in relation to the three fatal shootings.

No post mortem results for the three men killed were provided by the police up to the time of going to press.