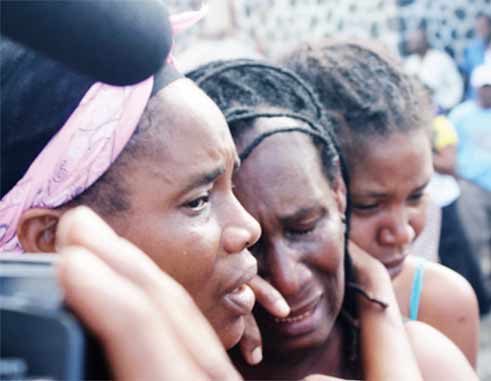 GUN violence erupted in the city for the second time this week, further heightening public fear that the situation might become worse before it gets better.

Forty-three-year-old James Alexander Nelson of Calvary Road, Castries became the fourth homicide victim for the year after he was shot and killed on the sidewalk near Courts Showroom on Chaussee Road Thursday.

The fatal shooting occurred just after 8:00 a.m. during the mid-morning rush, prompting many people to express their concern for being more wary about traversing the area even in broad daylight.

Scores of onlookers gathered near the scene where police cordoned off an entire block of Chaussee Road between St. Louis and Micoud Streets.

A police forensic team was seen processing the area where Nelson’s body lay for about two hours before being taken away by a Rambally Funeral Parlour hearse.

According to unconfirmed reports, Nelson had just left his home and was walking along Chaussee Road when he was shot by a group of individuals who immediately fled the scene. There have been reports of people noticing a small group of individuals acting frantically near the area moments before Nelson was fatally shot.

Relatives of the deceased broke down in tears as they stared at Nelson’s body lying on the sidewalk. They described him as someone who had no known feud with anyone. The VOICE also learned that Nelson was one of the men who – along with Asher Emmanuel who was shot and killed Tuesday – had recently acquired a tree-cutting contract in the island’s north.

Business in the area came to a halt last Thursday with many business places, including Courts and Shoe Circus, closing temporarily. Sidewalk vendors, too, closed up shop. Services at the nearby Castries Health Centre were also disrupted temporarily.

Speaking to the media last Thursday, President of the St. Lucia Craft and Dry Goods Vendors Association, Peter “RasIpa” Isaac, issued a message to sidewalk vendors, urging them to refrain from plying their trade until steps are made to bring normalcy to the precarious situation. Isaac described the situation as “worrisome” for those putting their lives at risk trying to earn a living. Many of those vendors, he said, are traumatized by the frightening experience.

“My advice to them is that they should stay home for a few days and look to see what’s going on,” Isaac said. “I don’t think what’s going on there is good for their business and their lives. I think they need to protect themselves.”

Director of Human Services, Elizabeth Lewis, also weighed in on the psychological effect the recent spate of violence has been having on the citizenry. She said such incidents of crime demand that proper psychological care is offered, especially to the victims’ loved ones.

“Certainly with an incident like that we have to provide some level of trauma counselling and debriefing,” Lewis told the media at Thursday’s crime scene.w. We will be working with the families as we recognize that a lot of people are affected.”

Acting Police Press Officer, Acting Corporal Zachary Hippolyte, told The VOICE on Thursday that he could not confirm whether police officers were posted in the area around the time the shooting occurred. He said police find themselves playing a cat and mouse game with the criminals.

“These criminals actually have their own intelligence,” Hippolyte said. “Sadly and unfortunately, the police cannot be everywhere at the same time. As much as we would like to be, we just don’t have that superhuman power. But I’ll continue to say that rest assured that no matter what the situation, we will do whatever we have to do by doing our duties professionally and, hopefully, cut down on these incidents of violent crimes.”

Hippolyte said police have been receiving leads in relation to the recent homicides and are pursuing those leads. Nevertheless, he said, police are urging citizens who might have information leading to the arrest and/or conviction of those involved in the crimes to provide that information.

The VOICE has learned that some individuals have been picked up by police for questioning in relation to last Thursday’s fatal shooting.