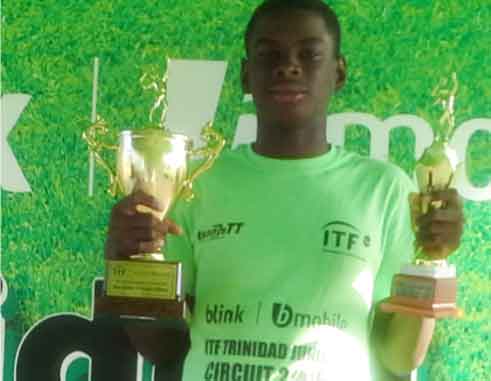 ST. LUCIA’S 2014 junior sportsman for the year Adriel Bousquet has secured the No. 1 ranking in the 14 and under division for the Central America and Caribbean region. This is certainly a first in St. Lucia’s recent history. He was able to secure the top spot on the back of one of the most successful tours by a St. Lucian tennis player.

These successes did not come easily, the Barbados singles final, Bousquet faced a vociferous crowd and took the match to three sets (6 – 2, 4 – 6, 5 – 7) in spite of the injury and partisan crowd. In Trinidad, he was forced to default a match and seek medical care at a hospital as his injury had caused swelling in his arm. This resulted in him being ranked among the lower echelons for the main portion of the tournament. He was forced to face three of Trinidad’s four top 14s players in Samuel West, Aidan Carter and Adam Ramkissoon, but rose to the challenge and beat these top Trinidadians to won the title in straight sets 7 – 5, 6 – 3.