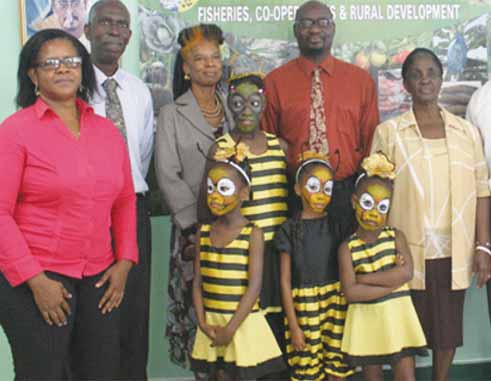 Dressed as bees, the quartet from Act Now Generation came bearing knowledge, reminding the Minister just how significant bees are to food production.

The Minister was presented with a research paper, “The Honey Bees and Restorative Justice”, done by former Chief Magistrate, Floreta Nicholas, based on an examination of local laws. The research paper was funded by the Global Environment Facility – United Nations Development Fund (GEF-UNDP).

Nicholas is one of the directors of Act Now Generation, an organization formed about 10 years ago. It main objective is to utilize the therapeutic value of the fine arts, culinary arts and culture as a form of healing for youth under age 30. The programme began as a form of restorative justice and an alternative to sentencing for youths within the justice system.

During last Tuesday’s presentation, Nicholas described Act Now Generation as “a generation now working on social issues”. She said the paper deals with local laws that pertain directly and indirectly to issues affecting local honey bees and their habitats. For all to benefit from the environment, she said, a more holistic understanding and approach needs to be adopted.

“We looked at the whole issue of restorative justice, which is a concept within the justice system that we need to have laws that help to restore the relationship of man to his inner self and man to his outer environment,” Nicholas said.

Nicholas said the research paper advocates that the entire nation does its part to protect the environment, (including) bees. She stressed the importance of bees in pollination, a crucial process in food production.

“Where we have to protect the bees or any matter concerning the environment, we have to come together and act now. These are issues that affect our food security,” Nicholas said.

“We have an organic farm and apiary which we have established at Bordelais Correctional Facility. We want to continue that project. We also have a colouring book for children coming out and some public service announcements with bees spreading the message that bees are very important. They may be small but they perform a mighty task,” Nicholas told the minister.

Jn. Baptiste said his ministry for many years worked with other ministries to restore habitats in order to protect bees. He added that while many people do not understand the importance of bees, the role of bees become crucial when they are in short supply.

“While in what many people call developed countries there are laws that protect bees, there are many countries that have tremendous problems because they do not have enough bees at this stage,” the minister said. “We in the Caribbean are very slow to pick up on things like that and I’m very grateful that private citizens develop organizations like this.”

He continued: “You do not need any prompting from any law or organization to understand the importance of an activity like this. I’m very happy that you’ve developed some relationships with the individuals at the Bordelais Correctional Facility and I’m even more excited that your relationship has grown into associations with children. Children are the ones who sometimes take the message to the relevant authorities in a way that the adults can’t.”

Jn. Baptiste said his ministry does its best in all its programmes to ensure that there is sustainability in agriculture. In giving assistance to farmers, he said, “we want to ensure that they do not use chemicals that are detrimental to the environment.” However, he added, the ministry still faces some challenges in that regard.

“It is not easy to stop it altogether at once but we are trying our best,” Jn. Baptiste said. “Even with the enactment of new laws, we want to ensure that our environment is sustained. I want to thank you for this study. I will spend some time reading it and ensure that we make it part of the development of our work.”

Jn. Baptiste said his ministry is sparing no effort in trying to develop the local honey industry as a potential cash-cow. Many people, he said, refer to honey as liquid gold. As such, any endeavour to create the right environment for protecting bees would be the right buzz that appeals to beekeepers and farmers.