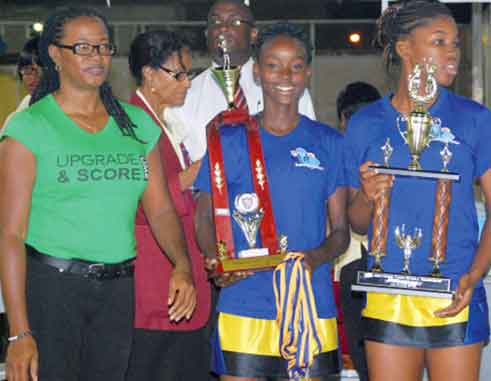 THE Barbados Under-16 Netball Team was in fine form in the rain affected final night of competition at the VigieMulti Purpose Sports Complex as they crushed St.Vincent at the Caribbean Netball Association Jean Pierre Youth Tournament to remain unbeaten.

Barbados won 36 – 11 with goal shooter RomanciaOdwin again leading the way with a game-high 28 goals from 41 attempts. (GA)Trishan Deane scored 2 from 4 and (GA) Tricia Phillips 6 from 8.

For St.Vincent and The Grenadines (GS) Itiesha Matthews scored 6 goals from 6 attempts, (GA) Nadicia John 4 from 10, while Aaliyah Anderson (GK,GS) had 1 from 2.

In other games played on the night, host St.Lucia hammered Trinidad and Tobago 30 – 14 following a rain delay. (GS) Kamala Mangal was in shooting form scoring 25 goals from 28 attempts and (GA) Tanny Williams 5 from 8 attempts.

Dominica and Bermuda played down to wire the with Dominica winning 21 – 20 Dominica’s (GS) CelenaLanglais scored 14 goals from 16 attempts, while (GA) Shernice Henry netted 7 from 12.

The 2016 tournament will be held in Barbados.