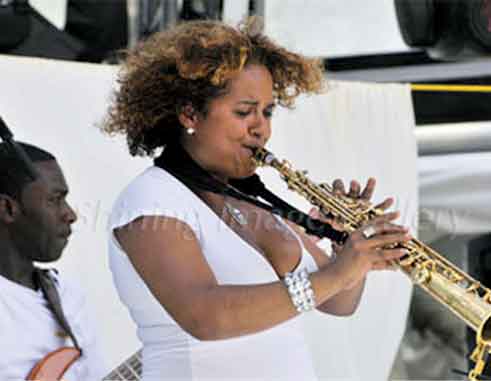 Heading the line up for the May 1, show is Jamaican reggae artiste Jah Cure. Another artist scheduled to take centre stage at the Soufriere Mini-Stadium is St. Lucian jazz arranger and composer Barbara Cadet.

With his repertoire of melodic reggae love songs and songs about dire social conditions, Jah Cure has earned himself a special place in the hearts of music lovers worldwide. Thus, his presence at Soufriere Creole Jazz is a thrilling occasion for Soufrierians and the rest of the St. Lucian population.

Born in Hanover, Jamaica in 1978, Siccaturie Jah Cure Alcock started his love affair with music from the tender age of three. Initially using the name “Little Melody,” he soon became the talk of Jamaica and was well on his way to success. At the age of fifteen, he moved to Kingston, where he met Capleton, Sizzla and Jah Mason. Beres Hammond subsequently took Cure under his wing and began mentoring him and producing him in the studio. Since then his rise to stardom has been meteoric.

Jah Cure has topped the music charts numerous times, starting with “Longing For” and “To Your Arms of Love” from his fourth album TRUE REFLECTIONS; “Call on Me” and “Luv on a 2 Way Street” from THE UNIVERSAL CURE album as well as countless singles recorded for major independent producers. His sixth album, WORLD CRY carried the track “Unconditional Love,” which shot to the top of the charts, becoming the number one reggae single worldwide. It also contained collaborations with Mavado, Rick Ross, Phyllisia and Jazmine Sullivan, crossing into hip-hop, Latin, Pop and R&B genres. Considering the fact that he recently fell in love with our beautiful island after collaborating with local producers, he is absolutely delighted to take the stage at what is arguably the island’s most scenic area.

Sharing the stage with Jah Cure at Soufriere Creole Jazz is one of St. Lucia’s very own musical stars Barbara Cadet. Having previously resided in the town of Soufriere, it is a blessing for her to grace the stage with her talent. Babara is an accomplished vocalist, arranger and composer. After being educated academically and musically in the United Kingdom, Barbara moved back to St. Lucia in her early twenties, where she headed the Woodwind Department of the St. Lucia School of Music and taught for several years.

Her residency in St. Lucia allowed her to gain a vast background in working as a musical director and producer of various large projects and with musical groups. She was co-founder and arranger of the 40 piece Allegro Pan Groove – all female band – which performed and competed, professionally and successfully, in St. Lucia’s Panorama and other events. Barbara was also the producer and musical arranger of the group, Sisterhood, which consisted of nine female vocalists who performed at Main Stage of St. Lucia Jazz and Arts Festival, and in other Caribbean countries at various events.

As recent as 2011, she was the musical director, composer and arranger for The Saint Lucia Collective which consisted of some of St. Lucia’s iconic jazz musicians performing at Main Stage. Barbara is no stranger to national, regional and international festivals and is a testament to the quality of the performances to be expected for Soufriere Creole Jazz.

As in the past various corporate and media sponsors shall work together with the presenting sponsor, the Soufriere Foundation, to put on a memorable show.