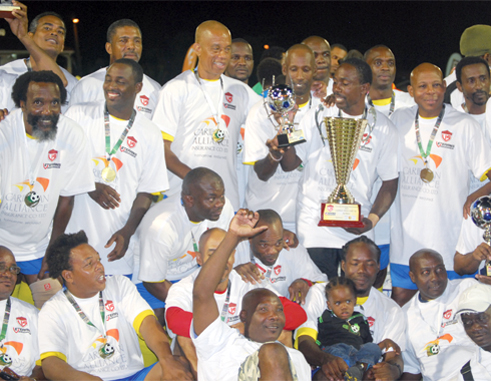 CARICOM Masters of Castries emerged champions of the 2014 – 2015 Veterans in Sports Inc Tournament which came to a climax on Saturday evening in front of a mammoth crowd of football enthusiasts at the Soufriere Mini Stadium. They triumphed in sudden death 6 – 5 on penalties against Soufriere after the match had ended 1-1 after regulation and extra time.

Prolific striker Jerome Serville put the home team ahead in the 37th minute with a well struck right booter that eluded former national custodian Abraham Mentor in the Caricom Masters goal. The score at the halftime whistle was 1 – 0 in favour of Soufriere as they had the better of the half and could have scored a further two goals.

Caricom Masters kept their composure despite being on the back foot for most of the encounter and got a controversial equalizer from KirtonCollymore in the 54th minute when he headed home past Soufriere goal keeper OsbertServille. However, the Soufriere team protested that the ball had not actually entered the goal by legal means but through a hole in the side netting. Despite their protests the goal was allowed by Referee Timothy Joseph.

VOICE: The scores were locked at one all after regulation and extra time what was going through your mind then?

Jn Baptiste: The game was not beyond us, although we were not playing as planned and to our true potential. Going into the dressing room, we had a discussion about the first half and came back into the second half and scored within the first 15 minutes and it paid off for us.

VOICE: Do you believe the home team Soufriere was a hard nut to crack on the night?

Jn Baptiste: “They are a tough team, very hard to crack, but sometimes when you apply pressure you get the results and hence we were able to get the equalizer, because pressure burst pipe and that worked in our favour.

VOICE: Scores locked 5 – 5 after the first round of penalties, sudden death would have settled the deal. What was going through your mind at the time?

Jn Baptiste said: Really and truly I knew we would made it. This is something we have been practising, it’s in us after every session. The entire team must take at least two penalties so there was no doubt in my mind nosing ahead.

VOICE: There was a heavy dew on the surface throughout the encounter; did it affect your teams style of play at any time?

Jn Baptiste: “No not all. It’s just that I did not like the way we played in the first half, but overall it was a team effort.

For their victory Caricom Masters lifted the Caribbean Alliance Cup, took home EC$5000.00 and will represent St. Lucia at the Wanderers Masters Invitational tournament in Barbados later this year. Behind The College All Stars won the third place play off after extra time 2-1 win over VSADC.

VSADC led 1 – 0 when Ernie Reneau converted from the penalty spot in the 8th minute. However, Don James equalized for Behind The College in the 44th minute and they achieved victory when Tennyson Glasgow scored with the right boot to give BTC All Stars victory in the 106 minute, a goal for which he later won the award for best goal of the tournament.