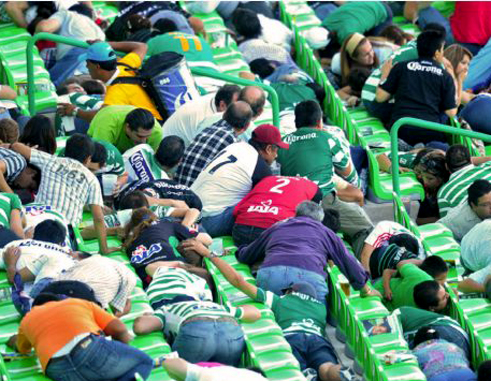 THE final of the Dr. Kenny Anthony football championship on Saturday evening was marred by fan trouble in the closing stages of the encounter between Young Roots and Green Lakes of Vieux Fort North and South respectively.

Crowd interference surfaced with Young Roots leading 3-0. The match had to be stopped by the referee after scores of football fans, including women and children invaded the playing area.

A pitch battle then ensued with fans of rival teams pelting each other with empty beverage bottles sold at the venue.

After a while, following police intervention, order was restored and the match resumed. Young Roots added another goal to their tally to win 4-0 and take the championship.

It was an unfortunate end to what was an eventful day with the formal commissioning of the Phillip Marcellin Grounds where some $2.6 million was spent upgrading the facility.

One man was seen lying on his back in the stands apparently struck by a bottle. The extent of his injury was not known at the time. It was not known how many others were injured.

Up to press time yesterday it was still unclear what trigged the violent behaviour .

Earlier, Parliamentary Representive for Vieux Fort South, Prime Minister Dr. Kenny Anthony had spoken in glowing terms of the addition of lights at the grounds. He said: “A few months ago we watched in despair as many other communities got lights, we wondered when our turn would come, but despair has now turned to joy as we are now able to commission our own facility.”

He added: “To the young people of Vieux Fort, we tested your patience, we know you wanted this facility very badly, but you understood it would take time and so you embarked on a journey of patience and understanding and for which I thank you immensely”.