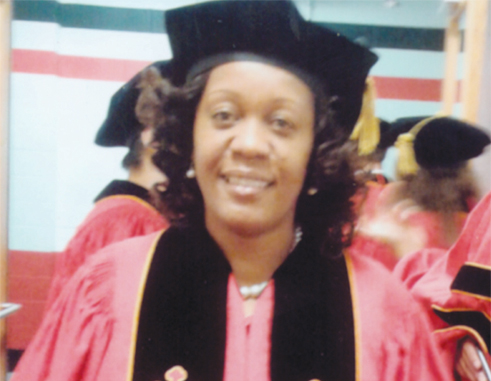 A former teacher at the Ciceron Secondary School has been appointed post-doctoral research scientist at the NASA Goddard Space Flight Centre in Maryland, United States.

Ms. Andrea Andrew graduated with a Master’s degree in Chemistry from the University of Maryland and also holds a Ph.D in Analytical Chemistry.

She is the daughter of the late Eustace Andrew and Angela John-Andrew of La Clery.

In 1994, while in St Lucia Ms. Andrew received a three year financial award to pursue studies leading to a Bachelor’s Degree in Science or Science Education at Brooklyn College, CUNY.

The award was granted based on her five years of continuous service in the public service with a proven record of exceptional service and the fact that her area of study was on the St Lucia government’s priority list of approved areas for national training.

Ms. Andrew was on the Dean’s Honour List at CUNY for three successive years 2004 to 2006 and won a number of awards for academic performance both in New York and the University of Maryland.

At the University of Maryland, Ms. Andrew was award the Centre for Teaching Excellence Graduate Student Lilly Fellowship in 2011 which develops and sustains cross disciplinary learning of graduate students as future faculty. Fellows develop a teaching and learning project of their choice directed at helping improve their professional development, as well as enhancing undergraduate teaching and student learning at UMD.

Ms. Andrew has authored and co-authored several publications on various aspects of chemistry.

She is now a Visiting Research Scientist at NASA Goddard Space Flight Center.