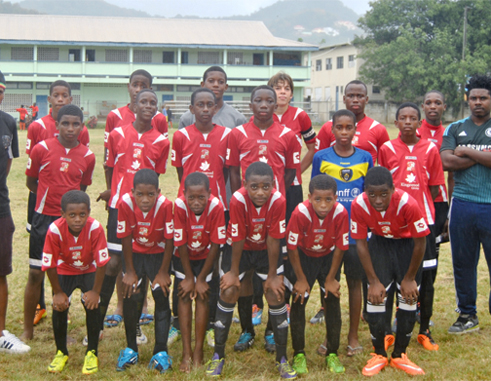 FIVE goals from the boots of Samuel Lawrence in a 10 – 0 win for Gros Islet Under -15’s, Micoud’s 6 – 0 drubbing of Mon Repos and, Vieux Fort North’s 6 – 2 victory against Vieux Forth South were just some of the major highlights as the St. Lucia Football Association’s Under -15 and Royal Club sponsored Under – 23 competitions continued at the weekend at various venues around the island.

In the Western Zone Game 1, Roseau had the better of Anse la Raye 3 – 2. The goal scorers for Roseau were Ed Fred in the 3rd minutes, Delwin in the 26th minute and Davidson Gibbon in the 51st minute. For Anse la Raye, Arron in the 29th minute and Dgal Augustin in the 64th minute.

Game 2, saw South Castries losing to Canaries 3 – 1. The goals for Canaries were scored by Darnell Jn Baptiste in the 30th and 85th minute, and Gerald Mathurin in the 20th minute. South Castries lone goal came from Mitch Alexander in the 42nd minute.

In the Southern Zone action Game 1, Soufriere had the better of Laborie 3 – 0. The goals for Soufriere were scored by RiqueineSoudatt in the 36th minute, Clint Duval in the 46th minutes and Jermaine Robert in the 74th minute. In an all-Vieux Fort derby Vieux Fort North won over Vieux Forth South 6 – 2.
In the Eastern Zone Game 1 was to have featured Mabouya Valley and Desruisseaux hot did not take place due to both teams not showing up for the encounter. Game 2 saw Micoud having the better of Mon Repos 6 – 0. The goals for Micoud were scored by CaniiNervias with 2 and one each for Lauren Marcellin, Cluivert Ferdinand, Deshawn Roserie and Malice Lubrin.

The Royal Club Under – 23’s played on Sunday. In Northern Zone action at the La Clery Playing Field in Game 1, Gros Islet had the better of Babonneau 2 – 0. The goals were scored by Manoah Fessal in the 12th minute and Armis Lorde put the issue beyond doubt in the 76th minute.

In Game No. 2 Central Castries defeated La Clery 1 -0, a penalty, scored by Emary Edward in the 40th minute.

In the Southern Zone Under – 15 in Game 1, Vieux Fort South won over Soufriere 2 – 0. The goals were scored by Telbert Evans in the 31st minute and Chris Jessery in the 92nd minute.

Game No. 2 featured Vieux Fort North against Choiseul, Vieux Fort North winning 4 – 0 with goals from Jeffery Estaphane in the 12th minute, VoisonSerieux in the 22nd minute, Duncan Gopal in the 40th minute and Vervan O’ Brian in the 57th minute.

In the Eastern Zone, Mon Repos defeated Desruisseaux 2 – 0; both goals were scored by Tommy Descert. In Game No. 2 Micoud defeated Dennery 2 – 0.