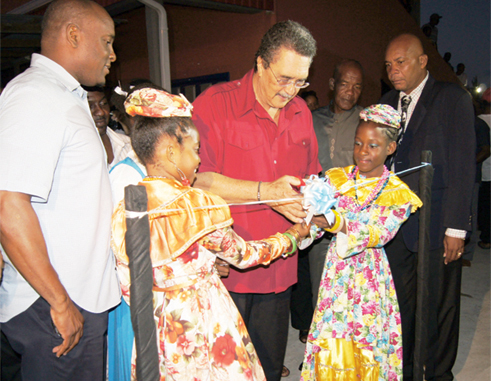 FINALLY sports enthusiasts in Vieux Fort South can now breathe a sigh of relief as they can now boast of having football and other sporting activities played under lights.

The Phillip Marcellin Grounds have now joined the likes of Gros Islet, La Guerre, Micoud, Soufriere and most recently Marchand which are presently enjoying late evening sporting entertainment. The long awaited dream came to fruition at the weekend a accost of over $2.6 million.

The Lighting of Recreational Facilities Programme, an initiative of the Government of the Republic of China on Taiwan and the Government of St. Lucia has provided lighting for several of the island’s recreational facilities, in order to assist with improving sporting and community activities.

Present at this historical function was Prime Minister Dr. Kenny Anthony and Minister for the Embassy of the Republic of China (Taiwan) Odi Sun among the dignitaries of on the night.

Addressing the gathering Sun said “he believed that the ties between St. Lucia and Taiwan would get closer and closer and the project was a good example of the ben-efits that can be brought to the St. Lucian people through the cooperation programmes.”

St.Lucia Minister for Youth Development and Sports Shawn Edward hailed it “an exciting day for the sportsmen and sportswomen of Vieux Fort” and said he knew that the Prime Minister is beaming with joy. He said he was equally elated at the occasion.

Said Edward:“This project has been in the making for three years and every time I came to Vieux Fort, the residents would stop me and ask: ‘ when are you guys going to make our playing field available?’. I had to say to them on many occasions: ‘you have to be patient in order to get a facility that can compare with those in other parts of the country’ ”.

Edward noted that Anthony was on record as saying that the people of the South were not second class citizens and they deserved the very best that St. Lucia had to offer. “I can assure you that in the area of youth development and sports what you get in Vieux Fort will be on par with what obtains in every other community in St. Lucia”, Edward promised.

Edward noted that Vieux Fort had a very rich history of sporting accomplishments, adding that some of the very best cricketers and footballers to have played for St. Lucia came from the town. Although in recent years there had been a decline in a number of Vieux Fortians on national teams, he was hoping that with the re – commissioning of the grounds “we will once again see a number of young men and women from Vieux Fort taking their rightful places on the various national teams”.

According to Edward St. Lucia was beginning to do well again in sports at the regional level capturing eight regional championships in 2014 , the best performance since 1987.