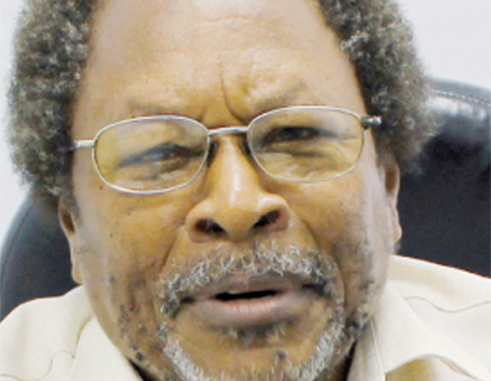 THE Civil Service Association (CSA) will soon be in need of a new general secretary as the position will become vacant at the end of this week.

David Demacque, the current general secretary, is soon to proceed on vacation leave up to the end of next month, which is when his contract with the CSA ends.

He will be leaving the Association at a time when its President, Mary Isaac and some of her members are at loggerheads and are likely to clash tomorrow at an extraordinary meeting called to decide her fate.

The controversy surrounds the decision by Isaac to accept a senatorial appointment offered by the opposition United Workers Party (UWP). Those opposing her say the move represents a conflict of interest.

Isaac said last week that the extraordinary general meeting planned for tomorrow may be unconstitutional, and she has left it up to Demacque to validate its constitutionality.

The outgoing general secretary yesterday said that his decision in the matter was guided by Sections 6.7 and 6.9 of the Constitution of the Association.

He declined to comment further on tomorrow’s meeting, the role he had to play as general secretary in determining the validity of the petition or the ongoing controversy between Isaac and those who have been calling for her removal.

The Association’s constitution states that an Extraordinary National General Meeting may be convened by the President or by the General Council or by written petition from no less than an equivalent of 75 financial members.

It further states that in the case of a request for a meeting by petition, matters to be considered shall be clearly indicated in the petition which shall be submitted to the General Secretary.

The Constitution added that such a meeting shall be held within 21 days of receipt of the petition, and that seven days’ notice of the extraordinary meeting shall be given either by public advertisement or by the Association’s circulars.

Section 6.9 of the constitution states that the entire Executive Council or any of its members may be removed from office during the period between any Biennial Convention on a two-thirds majority vote of those present and voting at an extraordinary general meeting held for this purpose at the request of at least 75 financial members. Such a request accompanied by their signatures shall be made to the Executive Council or any of its members. The request shall be sent to the General Secretary.

Section 6.9 further states that if an extraordinary general meeting removes the Executive Council it shall then immediately proceed to elect an interim executive council, until the next Biennial Convention.

Isaac has been putting up a brave front to the challenge to her presidency, stating last week that she has the support of the majority of the members of the Association.

BathelmyFedee who appears to be spearheading the move to oust Isaac also said that the General Council has missed three quarterly meetings which is in breach of the Constitution.

It is unclear whether Isaac will attend tomorrow’s meeting. However Fedee says that the business of the Association will be conducted with or without her. He added that failure on the part of the entire Executive Council to appear at tomorrow’s meeting will be to their detriment since this would be interpreted as being in support of Isaac.

“They too will have to go. A decision will be taken at Wednesday’s meeting,” Fedee said.