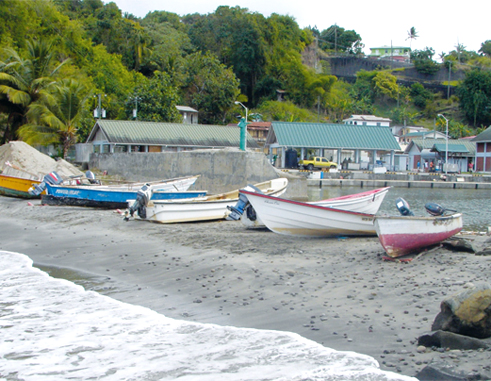 FRUSTRATED! That’s exactly how fishermen in Choiseul are feeling because the entrance to their fishing pond has been blocked by sand once again, posing a challenge to them to get their fishing vessels into it, and damaging their craft in the process.

The angry fishermen say their livelihood is being severely affected by the situation, and are appealing to the government to find a permanent solution to what was described as a perennial problem.

The problem arose a few years after the pond was constructed by the Japanese in 2003. The project which some residents described as a “disaster” was implemented for the improvement of coastal fisheries development. It was seen as a token of friendship and cooperation between Japan and St. Lucia.

An excavator which was donated to the Choiseul Village Council by the Government of Japan, was used to desilt the entrance of the pond. But for some time now this piece of equipment has been in need of repair and has been sitting on the beach, with no serious attempt to fix it.

According to the concerned fishermen, this temporary solution is of no solace to them.

They say they are tired of having to wade through the sometimes murky waters as early as three o’clock in the morning, to push their fishing vessels on racks into the pond.

“Sometimes the water stinks….We can’t take it again. It is very painful,” Julian Evans, a fisherman in the area lamented.

He added that fisherrmen sometimes have to seek help to get their boats into the pond, because of the difficulty they encounter in doing so.

Romanus Alcee, another fisherman and boat owner said : “It is the biggest problem fishermen in Choiseul are facing. It is seriously affecting our livelihood and as a result needs to be addressed immediately.”

He said the problem has resulted in a number boats being badly damaged, leaving many fishermen without a source of income.

Alcee described the use of an excavator to clear the passage to the pond as a waste of time, adding that the entire pond needs to be dredged.

Abraham Epiphan, also a fisherman, said it appears that no one in authority is concerned about their plight, which has left them very frustrated.