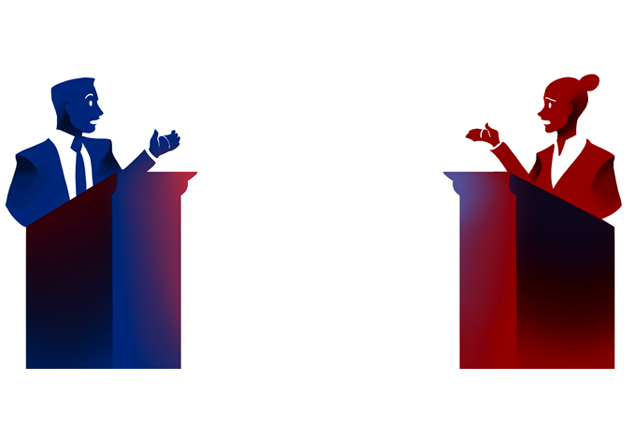 A debate may be formal or informal. The point to note about both types of debate is that they follow or should follow certain rules. Some of these rules include:
• Having a predetermined topic for the debate
• There is more than one team or party to the debate
• He who asserts must prove. In order to establish an assertion, the team must support it with enough evidence and logic to convince an intelligent but previously uninformed person that it is more reasonable to believe the assertion than to disbelieve it. Facts must be accurate. (From: Competitive Debate: Rules and Techniques, by George McCoy Musgrave. New York: H.W. Wilson, 1957.)

Barring the annual “Budget Debate” in Parliament, which, in my opinion, isn’t much of a debate at all, we have very few “real” debates in Saint Lucia. I venture to list some of the possible reasons for this:
• Reading isn’t very high on our list of likes. Even when it’s absolutely essential, many of us approach required reading with trepidation, hesitation, or distaste.
• And, speaking of our list of likes, you can bet that research, like reading, will not feature very highly there.
• When it comes to research, many of us do not even know where to start, far less how to filter the required data/information from, sometimes, voluminous data/information to buttress our assertion(s).
• The structured, rules-based nature of debate isn’t our cup of tea. We prefer the idea of offering a point of view (oftentimes via telephone to a talk show) unsupported by verifiable evidence, or attacking another’s point of view without the necessary verifiable evidence to lend credence to the attack.

From street corners, to talk shows, to social media, to Parliament—much of what passes for debate could be described as emotional “gut responses” based on one’s predisposition. For example, say, someone makes a public statement on the strength or weakness of the local economy, giving reasons for his assertion, many of the responses to that assertion will be something like “Mate lie, man. Mate doh know what he talkin’ about!” And, that will be that. The point here is not whether the assertion stands up to the scrutiny of rigorous analysis, but the utter uselessness of many of the responses following its passage. And, we sometimes ponder in bemusement on, or wonder about our state of development or lack thereof in this 21st century.

Planned development—especially of a national, long-term nature—goes (or, at least, should go) hand-in-hand with structured debate. And, I’m not referring to the type of debate that occurs in the two Houses of Parliament. National development should take into account the views of as wide a cross section of the populace as possible. This has happened on a few occasions, but that should become the norm rather than the exception to some perceived rule, which dictates that thoughts or ideas for national development is the preserve of an elite minority. Further, the question must be asked: After the wide-ranging, national consultation(s), what next? We have the experiences of national consultations on local government and constitution reform to chew on. Those consultations spanned several months and countries, and didn’t come cheaply. Yet, the report on local government (and its recommendations) sits somewhere gathering dust, while the constitution reform report, after being presented to Cabinet and laid in the House (but not debated), appears to be going nowhere after several years.

Why are we saddled with this seeming reluctance to debate national issues? And, why have we come to accept the sixty or ninety minutes’ talk show programmes as avenues from which to distil the core idea(s) of important issues?.

We’ve become an “instant solution” nation—no matter that many of the “solutions” sound like the inane mumblings of confused minds. Everybody has become an expert via the talk show circuit. (That is not to say that everybody shouldn’t have an opportunity to make a contribution.) And, some talk show hosts appear not to be as interested in enlightening their audience on some issue as they are in improving their shows’ ratings through audience participation—meaning, the number of calls they receive to their show. How else to explain a radio talk show host saying to a caller who called his show to provide “some clarity” on an issue that he had to “make it quick” because he (the host) wanted to “take as many calls as possible.” It appeared that the host just wasn’t interested in public enlightenment, he was more interested in getting as many people as possible to call his show.

And, the reluctance to debate national issues? In addition to the reasons listed above, we need to take a look at the psyche of our people. We have become accustomed to taking the word of our leaders (political, religious, civic, etc.) as gospel. Very few people question the veracity of statements/assertions made by leaders, especially if those leaders belong to a group or organization that they’re members of. And, many of our leaders know exactly that! So, why bother to have their statements/assertions put under a microscope in a structured debate setting when they can make off the cuff statements in a talk show environment, or in response to a question from a news reporter? They know, too, that our talk show hosts and news reporters/journalists are notorious for not doing due diligence investigation(s) when it comes to public statements by those public figures. And, this is such a shame! A shame because when talk show hosts invite public figures to their programmes to discuss issues (especially those of national importance), they should, at least, acquaint themselves with the essential aspects of the issue so they can properly challenge their guests on the assertions they make. The news media? The people who represent those entities have long forgotten, it seems, that the constituency they serve is the general public. Public enlightenment is part of the service they provide. When the enlightenment is missing from news stories, especially when there are opposing points of view, then those stories become meaningless.

In closing, let me make reference to a conversation between Dr. Tennyson Joseph, political science lecturer at the University of the West Indies (UWI) and Shelton Daniel, host of Radio Saint Lucia’s (RSL) “90 Minutes” talk show on Tuesday, 17th February, 2015. During the conversation, Daniel solicited the thoughts of Dr. Joseph on an independence lecture to be delivered by the UWI lecturer, the recent increase in the number of constituencies, and Mrs. Mary Isaac’s acceptance of a United Workers’ Party (UWP) Senatorial seat while serving as president of the Civil Service Association (CSA). In his responses, I got the distinct impression that Dr. Joseph placed particular emphasis on the participatory roles that should or should have been played by the general public in the first two issues as well as that same role being played by members of the CSA in the latter.

Dr. Joseph’s comments bring me to the issue of the role education and our education system plays in all of this (including debating these issues). And, that, my dear Saint Lucians, is the subject of yet another debate.