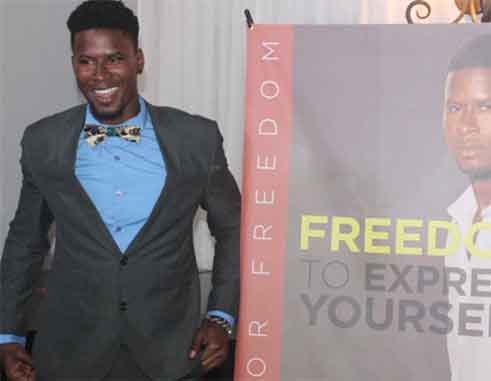 TWENTY-SIX-YEAR-OLD Cornelius George is currently attracting a lot of attention and deservedly so. After investing much effort, time and passion into creating a modelling career, he seems to be reaping some rich rewards.

George is originally from Micoud but grew up in Castries and now lives on The Morne. Three years ago, he was cast in the first Hot Couture fashion show, a key event on the Saint Lucia Jazz & Arts Festival calendar. He didn’t expect he would be cast that year because, he said, he was a bit overweight. The casting director saw things differently and he was chosen. That was the beginning of more opportunities to come.

“I tried out again last year and got cast again. This year, I was also cast. It’s just amazing being selected as one of the faces of the show. So, yeah, I’m overwhelmed,” George told me.

While working at Coconut Bay Resort & Spa in 2007, a young female guest approached George and told him he should consider getting into modelling. She told him to get in contact with her afterwards. At the time, he said, he thought she was joking, so he never took up that opportunity. The following year, he was approached by a local modeling agency in Vieux Fort and signed up. From there, that was it, he tells me. But it’s been no easy road to fulfilling his dream.

“It was rough at first. But right now, the journey is going smoothly. In the beginning, it’s always rough and then. I went through all that I had to go through for this. I’ve done minor local shows. But Hot Couture is definitely the biggest show I’ve ever been in so far,” George said.

George said he feels great knowing that all his hard work is beginning to pay off. There were times, he said, when people would question his decision to become a model. Many people told him it didn’t pay much and that he wouldn’t get much out of it. To date, he sees things differently. In fact, he tried his best to soak in all the attention he was getting at Tuesday’s press launch for Hot Couture held at St. James’s Club.

“Right now, it’s actually paying off,” George said. “Being one of the faces of Hot Couture is a lot. I cannot say it’s everything I want but it’s definitely a lot.”

That’s right. George and Hermina Nestor are the faces of this year’s Hot Couture set to rip the runway at the Johnsons Centre at Rodney Bay on May 6. He will be joined by several other models who will be showcasing the works of some of the best designers from six countries, namely Saint Lucia, Guyana, Trinidad and Tobago, Guadeloupe, Turkey and Cuba.

George says he hopes to use the experience and confidence he has acquired from modeling to branch out into other fields such as music and acting. A lot of what he does calls for preparation, so he still finds himself researching runway poses online and things like that. This is all in an effort to not become complacent in an industry that demands the best work ethic and the need for continued growth. George has figured out a plan to make it all work.

“If you want to do something, just do it and don’t give up. At first, things will be hard and rough. But whenever you focus on something, just focus on where you want it to take you. Think about the outcome, the end picture,” George explained.

This year’s Hot Couture is being held under the theme “Fashion for Freedom”. In some measure, George has broken the chain of self-doubt he had eight years and might well be strutting his way into an international modeling career. It just might be worth your while to pay attention to that fashion-friendly face of his.